Spiritual people are ready to consume whatever feel-good flavor of the day gets served.

The Spirit-minded individual is ready to consume the food that sustained God’s people for millennia through blessings, hardships, heartaches and celebrations (Nehemiah 9:20, John 6:53-63).

Spiritual people look for worship services that swoon, sway and sweep them off of their feet with a better felt than told, helium filled hands moment, material riches are coming message and an expect a miracle spiritual experience.

The Spirit-minded individual is looking for worship services that are guided by the Spirit so He may cut, correct and comfort hearts; draw us out of the world and near to God; culminating in our edification, sanctification, and devotion, and the exultation of God (John 4:23-24).

Spiritual people are seeking a life path that can be trail blazed in whatever fashion that fits them. They believe in life after death, but most often one’s lifestyle has no effect on eternal conditions.

The Spirit-minded individual looks to avoid grieving the Spirit of God by living for Heaven while here on the Earth being fully aware that the old man of sin can present a great danger to the new man created in Christ (Ephesians 4:17-32).

Biblical spirituality is real (Galatians 6:1), but it comes from being Spirit-minded and not necessarily from being spiritually-minded (Romans 12:1-2). EA

“But as it is written: “Eye has not seen, nor ear heard, nor have entered into the heart of man the things which God has prepared for those who love Him.” But God has revealed them to us through His Spirit. For the Spirit searches all things, yes, the deep things of God. For what man knows the things of a man except the spirit of the man which is in him? Even so no one knows the things of God except the Spirit of God. Now we have received, not the spirit of the world, but the Spirit who is from God, that we might know the things that have been freely given to us by God. These things we also speak, not in words which man’s wisdom teaches but which the Holy Spirit teaches, comparing spiritual things with spiritual. But the natural man does not receive the things of the Spirit of God, for they are foolishness to him; nor can he know them, because they are spiritually discerned. But he who is spiritual judges all things, yet he himself is rightly judged by no one. For “who has known the mind of the Lord that he may instruct Him?” But we have the mind of Christ.” (1 Corinthians 2:9-16)

Few problems burden our sanity like family problems. When issues divide us from the people we’re closest to it hurts, and it can hurt really bad. And when we hurt like that we look for answers where we can find them, and more often than not the average person is more interested in drawing close to God when troublesome times draw near than at any other time – and this is especially true when family ties feel like they’re going to be cut. And a civil-war brewing under our roof can make a person want to know if God will bring peace to their family.

While I can completely and personally understand the want, most people ask the wrong question when it comes to God and family and peace. It’s not a matter of God’s will;

it’s a matter of our own. The question that we should ask is, “Can God bring peace to my family?” Because the answer to that question is, yes! God wants families to live in peace with one another. But will God bring peace to every family? Sadly, the answer to that is, no. And he won’t because every family member won’t want the peace that he offers.

When family problems arise I encourage everyone to remember that just because you draw near to God doesn’t mean that others will follow with you, and Jesus said this much himself (Luke 12:51-53). So if we want the peace of God in our family we need to start by having it within our self – because we might be the only ones who know anything about it. EA

“Be anxious for nothing, but in everything by prayer and supplication, with thanksgiving, let your requests be made known to God; and the peace of God, which surpasses all understanding, will guard your hearts and minds through Christ Jesus.” (Philippians 4:6-7) 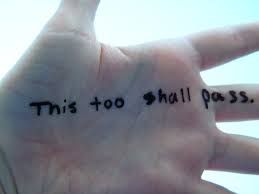 The seasons that I’m talking about are the temporary moments of time that will come our way and go away, then come our way and go away again throughout our Christian life (think Ecclesiastes 3:1-8). They are the experiences of the experienced! They are always ending, but they are always around the corner. So let’s briefly consider the first of these four particular seasons found in God’s word that our spiritual life will see sooner or later.

The first season is the season of trials and temptations as Luke described with Jesus and Satan out in the wilderness in Luke 4:13:

“And when the devil had ended all the temptation, he departed from [Jesus] for a season.”

Trials and temptations don’t hang around forever, but they, like the meteorological seasons, do come back from time to time. We are tried and we triumph, and then we are tried again; thus it goes with trials. A victory may temporarily end the battle, but there’s still a war to fight!

It’s important to keep in mind that each time we are tried it may be a little different, but the root is usually the same; and when the season of trial and temptation comes our way it may not be easy to bear due to a particular weakness, but we need to remember a couple of things as we are going through it:

2) Trials and temptations produce useful spiritual characteristics that only come from enduring through them (James 1:2-4).

Just like the changing weather outside, every season of life isn’t enjoyable as others, but they’re necessary for several reasons, and such is the condition of the seasonable trials and temptations that we face spiritually speaking. EA

“Wherein ye greatly rejoice, though now for a season, if need be, ye are in heaviness through manifold temptations: that the trial of your faith, being much more precious than of gold that perisheth, though it be tried with fire, might be found unto praise and honour and glory at the appearing of Jesus Christ:” (1 Peter 1:6-7 – KJV)