Is the prince of the world (John 14:30) the king of Hell? It seems as if many are convinced that it’s so but it’s not true.

While Satan may use many things to accomplish his destructive goal, destruction is what actually awaits him. And he knows it! 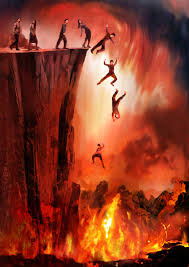 His future, along with the other angels who rebelled against the authority of Heaven (Jude 6), is dim, lit only with the fires of Hell.

When it comes to the final place of punishment, this place is prepared for the devil – it is not a place prepared by him:

“Then He will also say to those on the left hand, ‘Depart from Me, you cursed, into the everlasting fire prepared for the devil and his angels:“(Matthew 25:41).

The Devil will not rule Hell, for his presence in Hell will reveal that the Devil has been ruled by God, the Lamb and the work of the Holy Spirit.

Satan, along with any other soul who will find themselves on the wrong side of God’s wrath, will find that God’s authority exists not only over Heaven, but also over Hell itself. EA

“The devil, who deceived them, was cast into the lake of fire and brimstone where the beast and the false prophet are. And they will be tormented day and night forever and ever.” (Revelation 20:10)