If you have studied the Bible much then you’ve read when Jesus said this: “Are not two sparrows sold for a farthing?….” (Matthew 10:29)

And if you have studied a little a bit more then you’ve read when Jesus praised this: “And there came a certain poor widow, and she threw in two mites, which make a farthing.” (Mark 12:42)

But have you ever tied the two together for a much bigger lesson? 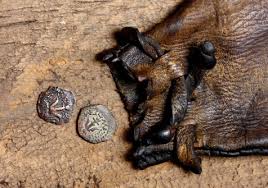 It happened then the same way it happens today – by adding God to the equation; because little is truly much when God is in it! EA

“For whoever gives you a cup of water to drink in My name, because you belong to Christ, assuredly, I say to you, he will by no means lose his reward.” (Mark 9:41)