R-E-S-P-E-C-T! The word demands attention. Cartoons spoof it. Anarchists hate it. People have written songs about it. Even the Bible talks about it: 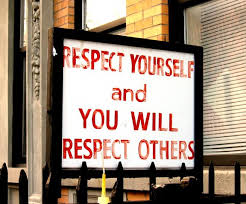 “Render therefore to all their due: taxes to whom taxes are due, customs to whom customs, fear to whom fear, honor to whom honor.” (Romans 13:7)

Judges expect respect with the word honor. The President is Mr. President. Superiors in the military regularly hear Sir and Mam. The same principle applies to teachers, police officers, bosses and even those who are elder in age. These are all things that are expected respected situations. We understand this…or at least we should.

Children are taught about these things because they need to learn to have and to show respect. A failure to teach children about the importance of respect will eventually lead to a disrespectful attitude that leads to an unrespectable life that displays a lack of self-respect. It’s amazing how big a difference a little respect can make in the life

So for these reasons alone I’m going to give a “respectable” effort and try to do better when it comes to showing more respect. How about you? EA

“Now when Michael, one of the chief angels, was fighting against the Evil One for the body of Moses, fearing to make use of violent words against him, he only said, May the Lord be your judge.” (Jude 9 – BBE)

Regardless of how one answers the second half of the question, the first half is only controversial to the darkened heart!

For one to conceive that it is morally acceptable to turn a womb into a tomb on the basis of some supposed freedom or civil right is abominable. It should be inconceivable to anyone who has any kind of grasp of what simple morality is to think that a “civilized” society should accept a concept such as abortion to be anything but the taking of an innocent life. How fast can the word “Hippocratic” become “Hypocritical”? Say the word “abortion” and you’ll find out.

If you are not familiar with the story behind the picture click here for the details.

Not only is the Bible clear on what a woman carries within her womb, but so is the common sense that accompanies any decent minded parent that has seen their child grow within the body of the mother.

“Now the birth of Jesus Christ was in this way: when his mother Mary was going to be married to Joseph, before they came together the discovery was made that she was with child by the Holy Spirit.”

Music has never been more portable than it is today. Hundreds, even thousands of songs can be carried along in devices the size of a pack of gum and even smaller.

Unfortunately, all of the songs that can be carried along for the ride aren’t songs that are worth the bits, bytes and gigs that they chew up.

Now no one can deny that decency and high moral standards aren’t exactly the two biggest priorities the music industry worries about. They sow whatever reaps the money. But naming that tune is a must for any parent today who cares about the standards that are presented to his or her child.

All Christians in general, whatever the age,  must be careful with what we allow to be repeated over and over in our ears no matter how good the beat sounds, but

Christian parents with children who carry around personal jukeboxes in their pocket must pay special attention to what the little ears are listening to with those buds. Because in an age when we listen to music that can be kept on the down-low by simply choosing the songs by private download over the Internet, a parent must take the initiative and be proactive when it comes to being aware of what the music “artist” is painting in our child’s mind.

Believe it or not, in May of 1965 the FBI investigated the lyrics of “Louie, Louie” after suspicions arose concerning possible “dirty lyrics.” Do you know why the FBI labs investigated the song? Because parents complained! That’s amazing when you think about the lyrics that today’s songs contain and how so many parents buy their children songs with lyrics that “could make a sailor blush” without thinking twice. The key phrase there is without thinking.

At the end of the day we must be willing to ask ourselves, “What kind of seeds are we allowing the iPod, iPhone and the MP3 to plant in the little ears of our offspring?” Because letting it go in one ear and out the other doesn’t mean our responsibilities are going away. That’s why as parents we must be prepared to listen to our children, but we must also be prepared to listen to what our children listen to!  EA

“And these words which I command you today shall be in your heart. You shall teach them diligently to your children, and shall talk of them when you sit in your house, when you walk by the way, when you lie down, and when you rise up. You shall bind them as a sign on your hand, and they shall be as frontlets between your eyes. You shall write them on the doorposts of your house and on your gates.” (Deuteronomy 6:6-9)

Kids don’t need fancy big screens TVs to have fun! Kids don’t need a giant “Grade A” steak to enjoy food! Kids don’t worry with having a designer label on their clothing when they go out! Kids don’t care if their dog is “a pure breed” or “a mut from three generations back” because they know it’s the loyalty that makes the relationship last! Kids don’t need expensive leather couches to kick back and relax!

I love kids. They keep things simple. I know life is simple to them because they don’t have to worry with bills, jobs, putting gas in the tank, etc. but the truth of the matter is sometimes we adults make the things on our “to do list” a lot more complicated than it should be. Kids leave the worrying up to the adults because we don’t let them down. Here’s a neat little “to do list” put together by a small child that their dad found. I found it on a news web-site and I thought that it might make you smile and reminisce:

It’s true that we all need to grow up and stop acting childish – but if we know what’s good for us we’ll still make time to act like a kid every now and then. EA

“Then Jesus called a little child to Him, set him in the midst of them, and said, “Assuredly, I say to you, unless you are converted and become as little children, you will by no means enter the kingdom of heaven.” (Matthew 18:2-3)