Many people sing the song that says, “There is a name I love to hear…” but do they mean it? They should, and we all should! Why’s that? Because there’s no name like the

Some in the religious world love to quibble over whether Jesus should be called ‘Yeshua’. Short sightedness! Why not call Him “Iesous” instead? That’s how we English speakers write what the Greek has recorded! What’s next? We have to learn to read the scriptures in the original languages you say? Hasn’t something like that been tried before??? At the end of the day when it comes to this “pronunciation, configuration and allegation situation” Titus 3:9 sounds better to me.

People need to realize that the power isn’t in the pronunciation – the power is in the person (Matthew 1:20-21).

Understand this: There’s been more than one Jesus, Yeshua, Iesous (Ιησούς), Hesus, Jesús, 耶穌, Íosa, 예수, Иисус, यीशु, Isa, Gesù, Ježíš, يسوع , תשווע to live life. But there’s only been one of those people who defeated death. 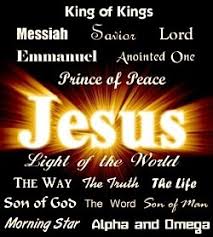 That’s the reason why there’s only one name given among men whereby we can be saved and there’ll never be another name like it; and that’s why we can sing about the name I love to hear! EA

“let it be known to you all, and to all the people of Israel, that by the name of Jesus Christ of Nazareth, whom you crucified, whom God raised from the dead, by Him this man stands here before you whole. This is the ‘stone which was rejected by you builders, which has become the chief cornerstone.’ Nor is there salvation in any other, for there is no other name under heaven given among men by which we must be saved.” (Acts 4:10-12)