There are times in the Bible when a person can miss the blessing of something because they don’t understand the purpose or point of God’s command. This is especially true when it comes to understanding why God had people do certain things in regards to their sin.

Many Christians today take for granted what God was trying to teach his people under the Old Testament. Some look at the Old Testament as old, and unworthy of study or care; but if a person misses why God had his people do certain things under the Old Covenant, they’ll never come to a fuller appreciation of what God has accomplished for us under the New Covenant of today! And there are very few places where this is more true than when it comes to the animal sacrifices found from Genesis to Malachi and right on into the gospels we read.

Let’s think about why God required what he required under the Old Testament, and how it can better help us understand the sacrifice that Jesus made on behalf of humanity when he established the New Covenant.

So the first question is, “Why did God have animals sacrificed?” If we’re not required to sacrifice them anymore, why were they ever sacrificed to begin with??? If God was going to send Jesus all along, then why didn’t he have people just say they were sorry and then forgive them when Jesus died? Why did God have people do something when it seems like it was useless in dealing with sin? Did God even care whether or not someone sacrificed an animal? If He did, then why did he say he didn’t sometimes? These are some of the issues and questions a person can have when they read about these things in the Old Testament and New Testament.
So did God really ask for, require and even command animal sacrifices? Contrary to what some try to teach, he sure did! When Adam and

Eve sinned and they made fig-leaf bikinis, and God said that wouldn’t do, what did He give them? He gave them clothes to wear! Now, you don’t have to be a tanner to know that you can’t get an animal-hide outfit to wear without the animal losing its life. Right from the get go with sin, a sacrifice was made. From the garden, to Noah, to Abraham, to Moses and all throughout the history of the children of Israel you will find God requiring the sacrifice of animals for sin. There’s even a book called Leviticus that deals with the intricacies of how to properly deal with the sacrificing of burnt offerings, peace offerings, guilt offerings and sin offerings that God commanded.

But if God required the sacrifice of animals then why did he at times say he didn’t want them??? I mean there are multiple places in the Old Testament where God plainly says, “NO!!!” Read them for yourselves:

As if that’s not enough, the New Testament says this about sacrificing animals as well:

If this is true then what was the whole point of it all? The point has to do with the context that all these verses are given in. There was, and still is, a big lesson about sin and the human heart behind all that sacrificing that God called for! The majority of the time, God’s people in the past, like His people of today, were missing the whole point of worship, sacrifice and sin.

When blood gets spilt – God takes notice! He noticed Abel’s blood (Genesis 4:10). He warns all men to take notice (Genesis 9:6). Judgment was pronounced upon the scribes and Pharisees because of bloodshed (Matthew 23:34-35). Even when an animal dies, God takes notice (Matthew 10:29b). When an animal was killed or sacrificed, God commanded that the utmost respect be shown toward the blood (Leviticus 17).

Why does God take notice of every drop of blood that gets spilt? Because life is in the blood: “For the life of the flesh is in the blood, and I have given it to you upon the altar to make atonement for your souls; for it is the blood that makes atonement for the soul’” (Leviticus 17:11). God called for the blood sacrifice of animals because He was teaching His people about the cost of sin.

But what does the cost of sin have to do with the shedding of blood? How do you get from something that a person does to an animal dying for it? 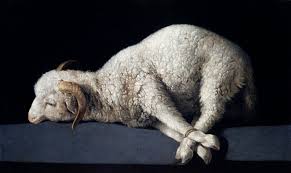 God has always been after the heart of men and women. If you go back and look at the context of the quoted verses that say God was tired of sacrifices, or that He didn’t desire them, you’ll find that the whole point was about how the sacrifice for sin without the remorse for sin was USELESS! At times God’s people got into habit of thinking that they were buying off God with the animals instead of recognizing the lesson that God was teaching them with the animals. The lesson was that sin kills! Every time! The lesson was about recognizing the power of God’s grace through the blood! The lesson was about getting to the heart of the matter.

But if the blood of bulls and goats wouldn’t remove sin (and it wouldn’t or else they wouldn’t have had to offer them over and over again) then why do it to begin with???

The whole time God was leading His people through the types and shadows from the words of His prophets toward the culminating sacrifice. God was getting them ready to see the blood that was going to be shed for the remission of their sins, our sins, and every sin ever committed. Every drop of blood ever split from a bird, bull, calf, cow, goat, sheep, or lamb was only a substitute until the blood of the Son of God was given for sins.

The whole reason God was revealing a shadow of grace in the Old Testament is so people would recognize the Body of grace when the New Testament came. What did Jesus say the cup represented while instituting the Lord’s Supper? He said, “This is my blood of the New Testament/Covenant which is shed for many for the remission of sins” (Matthew 26:28).

The reason so many people missed Jesus is because they weren’t looking for Him. They weren’t looking for the grace of God (John 1:17). The people didn’t mind God asking for a cow or a lamb every once in a while, but when Jesus came on the scene, He came preaching about more than sacrificing an animal. He came preaching about sacrificing our heart! He preached about faith, and love, and justice, and mercy, and humility, and devotion, and the necessity of a broken spirit.

Jesus’ preaching didn’t require anything new! It had always been God’s desire to have our heart: “For You do not desire sacrifice, or else I would give it; You do not delight in burnt offering. The sacrifices of God are a broken spirit, A broken and a contrite heart— These, O God, You will not despise” (Psalm 51:16-17).

Why did God have people sacrifice animals if it would never remove sin? Because God wanted His people to realize the cost of sin; because He was preparing the hearts of his people for the when the solution to sin revealed Himself.