A judge had to be summoned before the death penalty trial of Jesus could begin. Pilate was this judge. Pilate was not a complete stranger to Judea. He had become governor of 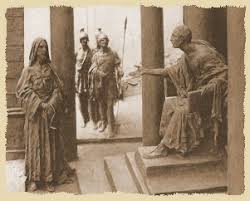 the area about the time that Jesus began His public work (Luke 3:1). Little did Pilate know when the job became his that the Judge of the world would soon stand before him.

Pilate was probably an experienced judge. He would have understood very well the role that politics, schemes and false witnesses played in the judiciary system. He had the ability to recognize character in another whether he had any or not! He understood his role as judge; he understood that life and death hung in “his” balance (John 19:10,11). No doubt many accused criminals had pleaded for mercy at his feet. But everything that Pilate was used to hearing from defendants would soon change. Pilate was going to meet Jesus!

The scriptures say, “And while He [Jesus] was being accused by the chief priests and elders, He answered nothing. Then Pilate said to Him, “Do You not hear how many things they testify against You?” But He answered him not one word, so that the governor marveled greatly.” (Matthew 27:12-14)

The scriptures the eunuch from Ethiopia read say Jesus was “led as a sheep to the slaughter; And as a lamb before its shearer is silent, So He opened not His mouth.” (Acts 8:32) The judge who no doubt had heard everything during a trial now heard nothing! Pilate knew Jesus was innocent and how weak the case against Him was (Matthew 27:18, 24) and he was amazed at the silence that this falsely accused defendant maintained. Without a doubt this made no sense to Pilate at all.

The thing about the situation is that Pilate marveled at the silence because he did not understand who was really on trial the day Jesus stood before him. I marvel because I do! (Romans 8:5-19)  EA